Over Thanksgiving, I went to visit friends in Atlanta. My logistics this time were actually very good, I had been hooked up to “apartment-sit” in one of the hottest lofts in town and had the place mostly to myself. This made it all the more frustrating when I encountered more flakes and more timewasters.

Initially, Tinder in Atlanta produced results that far surpassed my expectations, even knowing that the city has favorable gender ratios: a whopping 103 single women for every 100 single men aged 18-34. I selectively swiped every woman within a seven mile radius of my apartment and got 55 matches in five days. In comparison, in San Francisco I get about 25-40 matches per week.

I’m sure at least some of this has to do with the fact that I tend to do well with black women, and the ratio for black women to black men is staggering in Atlanta (115:100 for the 18-34 age range).

In any case, I fired off a bunch of openers and immediately had a bunch of girls go cold. The holidays are definitely tough for Game. I get one number from a black 5.5. We exchanged about ~10 lines, I established that I was in town for a short time to prevent any misunderstandings on her end, and I invite her out for a drink. She responds: Yeah we totally can. I’m a bartender, if you wanna come by my bar tomorrow you’re more than welcome.

I wasn’t keen on meeting on her terms, so I let her sit for a day, then told her I had plans and we could reschedule for another day. Transitioned to text, a photo ping and some short chitchat later and we schedule for the day after Thanksgiving. I try to get her over to a bar at my apartment, but she resists: 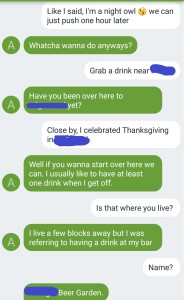 At this point, I knew this was probably a lost cause, but I had no other plans and decided to see it through. This girl was somewhat of a “dominant”, in Blackdragon’s terms. I don’t go out with many of these girls and don’t tend to do well with them.

I met her at her bar and immediately realized why it was a bad idea: she had just gotten off work and kept getting distracted by her coworkers and group of regulars coming in. Several times during the date she ran off to hug or talk to other people that she knew. I didn’t want this to keep happening, so I suggested we bounce to another bar across the street. She complied, but still was “leading” the interaction. It was her city, her scene, and at the other bar she still knew all the bartenders and was having fun giving me a tour of the place. Finally, we bounced to a third location where she knew less people and I was able to sit her down for a drink.

I ran very good date game. Relaxed posture, alpha body language, asked her questions. I did very little talking, and she exclaimed multiple times how she was doing all the talking and she wanted to know more about me, upon which I continued redirecting all the questions to her.

To transition into sex talk, I asked about her experiences on Tinder. She started half-drunkenly rambling about  how there’s an “expectation” that goes along with meeting someone from out of town that’s just visiting, but she was just meeting me to show me a around the bars and have fun, blah blah blah, then she made a very abrupt transition to talking about how she’s been celibate for 7 months, and how she’s been raped in the past, essentially sub-communicating that she doesn’t want to have sex.

Or was it? I decided to plow through this one, because I had nothing else to do that night and I was curious to see if I could overcome the crazy. I smiled and nodded and ignored her objections, and continued on talking about different things as I ramped up the kino.

I fucked up a couple of times at this point: the first time when I touched her hair and she got mad, telling me I should know to never touch a black girl’s hair. I should know that, because I’ve made the same mistake with multiple black girls before. The second is when I clumsily spilled her drink all over her lap and pants. I laughed it off and the bartender made her another one for free (I spent a total of $0 on this date, which was a plus).

I used two mini-routines for the first time that I may try out more: the first was getting up to go to the bathroom and telling her that when I got back I was going to kiss her. She rolled her eyes. The second I made up myself: after I got back, we talked for another 10 minutes or so, then we started talking about marriage and kids, and I started going into a routine about how we were going to marry in Vegas, and they were going to say “Kiss the bride!” At which point I leaned in and kissed her and she reciprocated very strongly. We broke it off after a couple seconds, mainly her pulling away, but I could feel she was into it. After five minutes of talking, I tried again and she got even more into it, but pulled away again, saying “I don’t want to be the type of girl that makes out in bars, I hate when people do that.” I agreed, and at some point I told her we were leaving. She asked where we were going and I gave some sort of excuse.

I’m not sure what my plan was at this point. I knew she lived a couple of blocks away and I was trying to get her to pull me back to her house. As I mentioned in my previous post, I still have no idea how to effectively get a girl to invite me to her house. We walked back to the bar where she worked and we both used the bathroom. She sat down on a stool and I said “So, are you going to show me your place?” She vigorously shook her head no. “OK, I guess we’re Ubering to mine then.” Her response: “No, I told you I don’t do that, remember?”

I continue to be amazed at girls who willingly go out with a guy visiting their city, on TINDER OF ALL PLACES, and aren’t down to fuck.

Without skipping a beat, I said “OK, I’m going to head out.” The look on her face soured. “Why?” I tell her I’m going to hang out with my friends, then walk briskly out of the bar and leave her to herself.

She probably talked shit about me with all her coworkers and lamented the lack of good guys on Tinder. Good. Hope she learned a lesson.

I then ended the trip by scheduling a date the next day with a Colombian girl, who cancelled five hours before the date after grilling me with questions and finding out I didn’t live in Atlanta (despite me telling her in our initial conversation).

So I leave Atlanta empty-handed. This city has major potential, but it still continues to be difficult, nigh-impossible for an man of average facial attractiveness (me) to hook up with a girl from Tinder while visiting a North American city.

One thought on “Timewasters in Atlanta”

For daily reports of my journey to becoming advanced at cold approach from November 2021 to November 2022, see Pancake Mouse Field Reports.